Is SSL a Requirement for All the Sites? 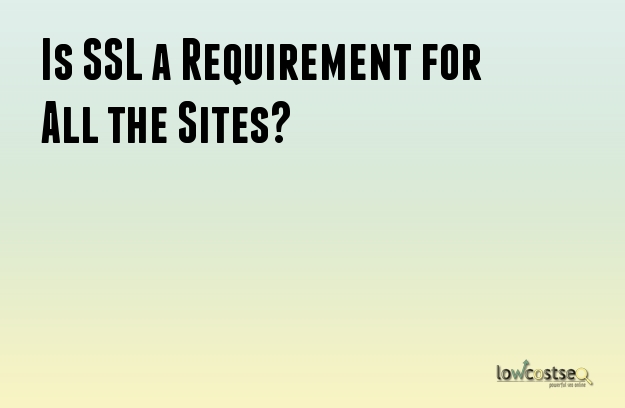 It seems Google is once again at work to make the web safer as it is asking webmasters around the world to move from the standard http to more secure strong HTTPS encryption. Google itself has moved from http to https couple of years ago and almost all its products like Google Drive, Gmail etc are using https. So, if you are using any Google product, it is highly likely that you are getting served via a secure connection. However, this is not the first time that Google has gone public and has urged webmasters to embrace something new to make the web safer. Nope, Google has been doing this thing for quite some time. They have already created a resource for the webmasters to ensure that the security of their website does not come under any internal or external threats.

So, it always makes sense to follow the rules and regulations as dictated by Google as it will help you bolster the security of your website. However, Google is definitely upping the standard this time around and asking webmasters to migrate to a safer and more secured https version as it believes will make the web a lot safer. They even announced that sites with HTTPS encryption are going to get some advantages when it comes to ranking high in Google’s SERP. Just a few months ago at a Google I/O, Google ask the webmasters to embrace https as the new standard.

Google has already started giving unfair advantages to those sites using encrypted connections as they have incorporated it in their ranking signals. However, this signal is definitely not as strong as its other signals like – quality of the content, bounce rate etc but this signal without any doubt is going to change the landscape of the SERP. As far as the claims of the company is concerned, this signal is going to impact less than 1% of the search queries worldwide. However, over time there is a possibility that they might strengthen the signal a bit to make the users feel safe on the web.

It might look like Google is pushing the webmasters to move from http to https. In fact, it has become a norm for all shopping or ecommerce website to use https to hide the information that users might be passing over the net. And it has already been observed that ecommerce sites that are using https are ranking high compared to their non-https counterparts.

But the problem is that migrating from http to https is not that easy. One needs a good level of technical knowledge otherwise they might end up messing things miserably. So, there is a chance that website owners might stick to the standard http version and this might affect the rankings of their website even after producing high quality content which is kinda unfortunate. So, if you are really concerned about the visibility of your website on Google’s SERP, we can say that time has come that you should be migrating to https version for your own good.