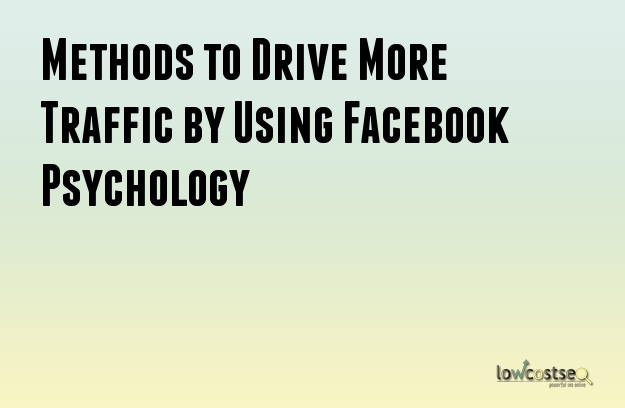 When you have launched your business in the virtual world or the Internet your prime must be to gather as many traffic as possible. However, just by launching an official website of your company is not enough to gather traffic. There are various tools that are available these days that you must make use of in order to gather sufficient traffic.

So, how can an entrepreneur make use of facebook psychology in order to drive or attract more traffic to his or her business site? Well, here are few convincing tricks that one can use.

It is a common notion that facebook basically taps the pleasure center in the brain. People are generally happy when they log onto facebook. That is the reason why you can notice various positive psychological reactions like pupil dilation. However, the reason for pressing the like button on facebook is to signify a positive feedback to the post or the image that is shared.

Studies clearly show that near about half the percentage of people generally like posts at least once a day, whereas near about 30 percent of the people are in the habit of liking a post several times per day. Apart from that, it is quick and easy nod for conveying a positive message for the post or event. It is also the best way to convey one’s thought process. Studies clearly shows that approximately 55000+ people based on the type of posts they like one can figure out whether they are straight or gay, republican or democratic, female or male, and also their age variation.

There are also other factors that are taken into consideration for liking a facebook post, image, or even a page like coupons, favorite brand, and updates.

The reason as to why people like to comment is because they are looking to share their viewpoints. Thus, keeping all these things in mind one can certainly prepare their contents according to that.