Mistakes in Google Adwords That Need to be Avoided 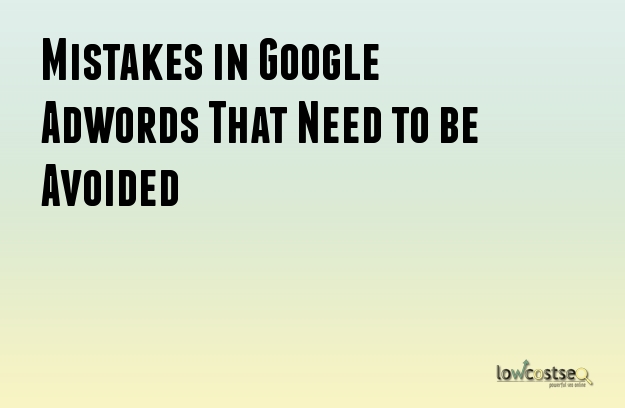 Mistakes In Google Adwords That Need To Be Avoided

It has been over a decade since Google Adwords was first used and since then it has become one of the most widely used online marketing tools. Many businesses nowadays use Google Adwords to promote their business online and this method has become highly successful. It must be borne in mind however that this is still a technical advertising option and hence it is prone to its share of mistakes.

One common mistake made by many is directing all your keywords towards one target group. This might not be a good idea as ads somewhat become one dimensional and might compromise the success of the advertising campaign. The use of over specific keywords may also not yield fruitful results. So broader word strings need to be used to get a wider array of hits. Moreover incorrectly grouping Google Adwords might also spell difficulties. Ideally, there should not be more than 20 keywords in each group.

People often make a big mistake in not using the correct keyword matches. This will determine the success of your ad, as a broad match. For instance, it will deliver a large number of impressions, but it will deliver matches that are not directly applicable to the product being marketed. A particular Google Adword can be successful on the first couple of occasions, but will not be successful perpetually. So it is important that this campaign is updated continually in order to ensure that the same strategy does not become monotonous.

Furthermore, users of Google Adwords often make the mistake of failing to calculate the life time value that their customers provide them. Failure to do this prevents an effective decision of how to manage advertising campaigns. The higher the lifetime value of a particular group, the greater the emphasis that should be placed on it. Finally, in using Google Adwords, marketers may often be overzealous in being in the top two ad positions. It is a common misconception that positions below this are ineffective. The reality is that customers who are not that interested will often spend time on the top two options. Only those who are really interested in the purchase will explore all the ranked options and then figure out the best buy. So driving the customers to look through the other parts of the ad is essential and this can be achieved by using the Google Adwords in a user friendly fashion.

Lastly, not testing an ad copy is also a common mistake. Your ad may seem promising, but you need to be objective to know if they really work. Making different versions of the ad will give a tremendous advantage. Once different versions are created, they should be compared by examining which ones have the highest click-through rate. This will provide which ad is effective in drawing the crowd in, as evidenced by real numbers.

The above sets of mistakes are often made in the ads while using Google Adwords. Avoiding these will make marketing effective and successful, and maximize the tremendous power of Google Adwords.