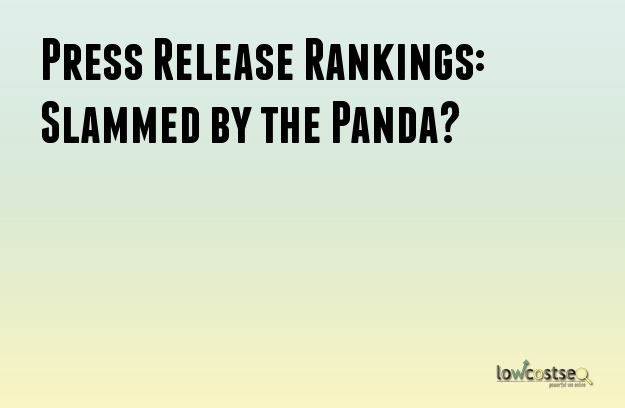 Love it or hate it, Panda is here and here is to stay. Okay we are not talking about the cute little animal rather we are discussing the vicious Google Panda update that has created quite a ripple in the search industry for some time now. The latest Panda update, code named - Panda 4.0 was released in May 19, 2014 and as expected, it created panic and confusion among marketers.

Like any other Panda updates, Panda 4.0 targeted sites that allegedly to contain low quality thin content or duplicate content. Of course, there were some winners and some lowers in this update; some websites saw massive gain in term of visibility in the SERP whereas some websites got nuked by this update. However, the most unique thing about this Panda update is that it has specifically targeted Press Release websites.

And if this is not enough, Press Release websites have also come under scanner for their alleged role in paid link. It is an open secret that some of these so called high quality Press Release Websites ask for money if you want to get a dofollow link from those websites. Even in some worse cases, they do not even hesitate to offer do follow links with exact match anchor text.

Therefore, it is no wonder that Google has to intervene at some point and the result is the Panda 4.0 update.  Here are some reasons behind the fall of Press Release websites from the grace of Google –

They Have Become Spammy

Yeah lately, they have become a hell lot spammy. The quality of the Press Release websites has fallen massively in the past few years and they were not definitely helping the cause of the searchers who were looking for information. They had become a part of a network of spammy sites which were churning out basically spammy Press Releases to help some marketing companies build do follow backlinks.

Some Press Release websites were asking huge amount of money to circulate the same Press Release on a large network of websites. The very concept goes against the Guidelines of Google and therefore, it is no wonder that they get tanked by Google Panda updates.

Thankfully after this Update, Press Release websites are changing their terms and conditions and are giving more attention to the quality of the press releases before making them live.