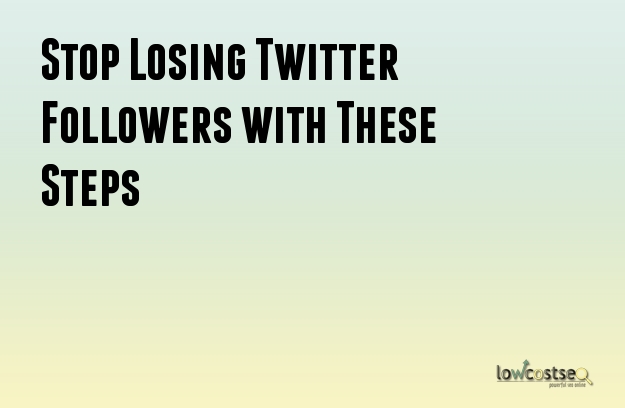 Twitter can be a popular social network for prompting your business. You will, of course, need a lot of fans and followers in order to run a successful marketing campaign in Twitter.

You may have already gained a lot of followers in Twitter to promote your products or services too. However, if you are noticing that more and more people are deciding to stop following you, then you have a problem. Twitter may be a great place for businesses to market their services. Be that as it may, Twitter is also filled with many businesses that are considered to be nothing more than nuisances by people that once followed them.

In order to eliminate such a scenario occurring to your business, you can make use of the following tips.

In Twitter, it is actually quite easy top overwhelm your audience with continuous updates and statuses. Ensure that you post only a few times during the day. Your followers do not want to see your updates every time they open their feed. Their social life does not revolve around your business.

Respond As Soon As Possible

Twitter is one of the most fast paced social networks available currently. If your followers have raised questions, they are likely to forget it after a day. In worse scenarios, they may get the answers from others. These situations only make your business look professional. Try to reply within 30 minutes with an hour being the most. Nonetheless, try to make as many replies as possible even if you are considerably late.

You may feel that automated tools are a boon for your Twitter marketing campaign. Unfortunately, most people on Twitter do not agree. Automated posts and replies tend to lack the personal touch which is one of the cornerstones of any social network.

If you continuously tag your followers without asking for their permission, you are simply showing that your company is desperate. In the worst case scenario, you can be reported as a spammer or as a suspected bot user. That can severely damage your Twitter marketing campaign.

You may think that filling the entirety of your tweet with hashtags looks cool. However, it actually ends up looking extremely silly. Your followers can find your tweets to reek of desperation. Be disciplined in your usage of hashtags. Use only what is necessary and avoid adding more than a couple.

The efficiency of your Twitter account is only limited by the way you use it. By avoiding common mistakes, you can not only retain the majority of your followers, you can actually gain more. Create a good marketing campaign exclusively for Twitter that makes the best use of its features to become a success in the social network.