What to expect from Google Penguin 3.0 update 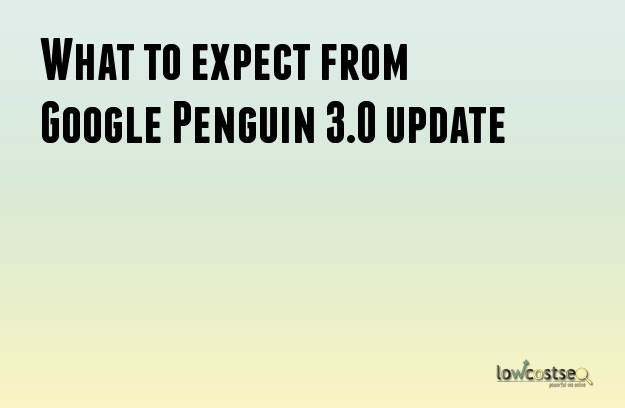 So, the SEO worlds is once again getting abuzzed with the rumors that Google is about to refresh its Penguin algo to punish websites that are still using spammy techniques to artificially boosting the rankings of their websites. There have been some false flags but most marketers are of the opinion that Google has not released it yet. Though there have been some significant chatters on Google Webmaster Forums regarding a possible Penguin refresh, Google has kept a dignified silence over the issue so far. However, the million dollar question is which sites are going to get affected by this upcoming Penguin update. Here we are going to explore some possibilities –

Google has already made it very clear and has said categorically that they are going to come down very hard on spammy guest posting. They have even asked marketers to stop using Guest Posting as a primary mean of building links. So, if you are still using guest posting for the sole purpose of building links to your website, you need to stop doing that. The purpose of Guest Posting is to gain recognition and promoting your brand value. But some online marketing companies have taken the concept too far. They have started posting low quality content on low quality guest posting sites and thereby defeating the very purpose of doing guest posting. Sites that have been involved in this spammy technique are going to get affected severely by the upcoming Penguin penalty.

It is strange that despite so many warnings from Google, there are some marketers who are still involved in doing spammy link building. These old school marketers are still using spammy directory submission, book marking, article submission etc in order to boost the ranking of their website artificially. Some of them are even publishing the same article on hundreds of article submission sites in order to create more inbound links.

Since the update has not been released yet, it is hard to make any kind of prediction. However, if we can go through some of the latest updates given by Matt Cutts and his lives, it is fairly evident that they are going to make changes in the upcoming Penguin update so that it becomes all the more difficult for spammers to game the SERP. So, if you are doing any of the aforementioned SEO activities, you need to stop doing that now and fix things because Penguin strikes.