Why Is My Page Penalised by Google? 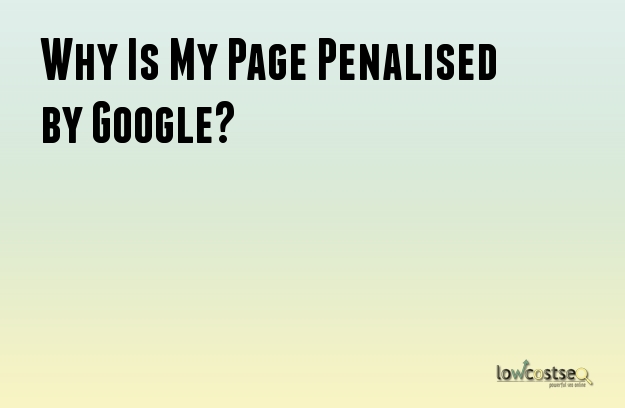 If you’re reading this article and you’re a beginner in SEO, I’d understand and let you off the hook (Google won’t let you easily though.) In fact, I’ll be laying out the possible reasons Google is penalizing you.

First, double check if you really got a penalty. To do this, log in to your Google Webmasters account, click “Search Traffic” then “Manual Actions.” If it does not say “No manual webspam actions found,” then yes, you have been penalized by Google.

Because of this, I should let you know that if you ignore it and proceed like nothing happened, your efforts will be put to waste. A penalized page cannot receive any traffic unless the problem is solved. Don’t worry, you can recover. To do that, you have to find out where you went wrong with your site first, and understand these contributing factors.

The 90’s is a great decade of music, Fanny Packs, and Tamagochis. But if you’re treating SEO like it never evolved at all, then you must have been living under a rock. Let me introduce you to Penguin, Hummingbird, and Panda – these are just a few of the update names Google released in the past years. Along with those animals are the biggest changes in internet history and there are A LOT of them (voice search, mobile-friendly sites, etc.), so you better get going and find out what they’re about. This is a common reason why a page receives an algorithmic penalty – a type of penalty caused by the changes in the algorithm – or a manual review penalty from a webspam team.

You Believe in Black-Hat SEO

Or you still believe that it’s easy to escape from using black-hat SEO. Google is pushing its boundaries when it comes to kicking off spammy websites to give way to reliable and accurate content. Some black-hat SEO methods may have been missed by Google’s radar before, but chances of it surviving until now is low. Instead of looking for loopholes on Google’s algorithm, be a saint and play by the rules. It might not immediately bring you back to the game though. Google will need more time to properly label your website if it is going to be relevant to its users or not. Stop buying and swapping links, manipulating PageRank, duplicating content, cloaking redirects – basically, stop using malicious tactics to avoid receiving site-wide penalties that will taint your site forever.

Your content is a major SEO tool, if it isn’t working for the users, then it’s useless for the site. Fix internal errors and submit an accurate XML sitemap to Google for your site’s advantage. Additionally, be careful in choosing your links because using bad/poor links can result to more suspicion from the folks at Google.

People do have a tendency of abusing the use of tools, and Google does not like that. As much as possible, H1 tags, keywords, anchortexts, affiliate links, Meta keywords, and outbound links should be kept in check. Always know when to stop when it’s too much.

Are you Penalised by Google?

Since MetaFilter’s creation in 1999, the company has experienced around 50% drop in in traffic in Google search engine. It has not yet recovered, and Danny Sullivan from SearchEngineLand refers MetaFilter as the poster child of problems with Google’s penalties due to the updates. While Google has made tremendous advances, it is still an imperfect system that may not incentivize quality accurately and consistently. It is no longer surprising when Google hits small or large businesses. Google updates have penalized small and large businesses for years, and the sites that aren’t penalized do not generate much empathy from the masses.

Some small businesses do buy services or things that many might consider a gray area or unsavory. Some sites have layers and layers of garbage which may seem innocent at face value. Some sites are pure content farms that satisfy Google’s Panda update. Demand Media Studios was hit significantly by Google’s Panda update. Many commentators have contested that Google’s updates were seemingly too powerful or monopolistic. Apparently Google considered content from Demand Media properties a nuisance to give priority on their search engine.

MetaFilter has been around for a while. Old-timers have been using MetaFilter before sites like Twitter, Facebook, BuzzFeed, and Reddit came along. For a while no one understood why MetaFilter suffered. Many individuals and businesses agree that when Google penalizes a site, it can be difficult to find out what is causing the penalties. The updates can be caused by both automatic and manual penalties.

A manual penalty is when an actual live person at Google decides there is something wrong with your page or several pages, and decides that the page or pages should no longer rank on the search engine results. Google says that it sends notices and reports all manual actions through Google Webmaster Tools to the websites affected. A few years ago, a website administrator would not even notice when a penalty is given.

The most challenging aspect of manual penalties is correcting them when they are given. Google does not deliver enough information about why a site is penalized. The causal factors of the penalty are so ambiguous that it seems as though Google does not care if the webmasters can rectify the issues. Some sites have compared Google’s penalties to when a police officer pulls someone over, and asks the driver, “Do you know why I pulled you over?” Google leaves you guessing on why your site was penalized. Google has promised to improve their penalty notifications, but they still have a lot to do and improve upon in this area. For now, Google calls the penalties "adjustments", especially when the algorithms automatically change a site's ranking in the search engine.

The current search engine climate portrays a dictatorial regime, where webmasters are constantly in fear of what the Big G would do next. It is not clear what the “penal code” is, and those who are convicted are often not aware of what their crimes are. This is what Google must work on moving forward.